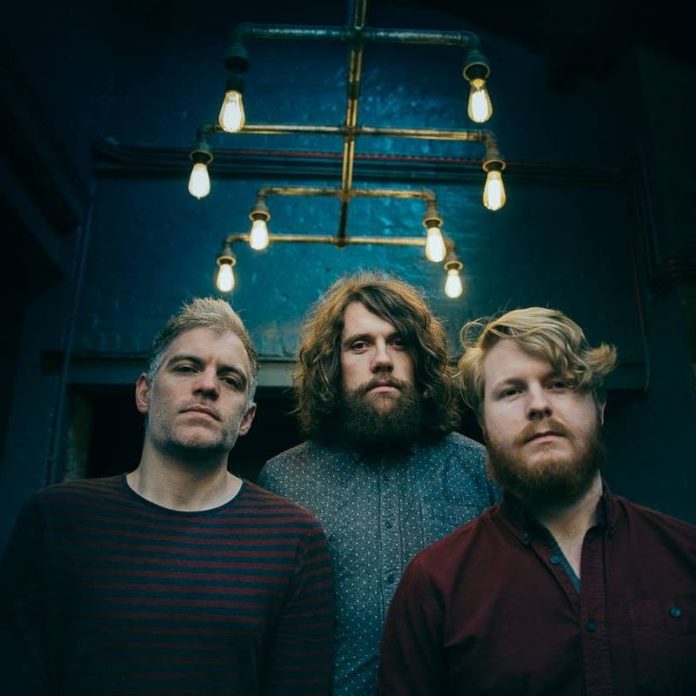 Before Arctangent 2019, we have had the chance to interview Tom Peters, Alpha Male Tea Party’s guitarist. Alpha Male is a band of Math-Rock located in Liverpool. This year, the group will perform in ATG a tribute to Dan Wild-Beesley, guitarist of Cleft, that died because of cancer this year. They will do that with friends of the deceased Dan.

First of all, the team of Rock Culture want to thank you for giving us the opportunity to have this interview. We are very glad because you are one of the bands we think have more future in Europe. Could you introduce Alpha Male Tea Party and yourselves to the Spanish audience?

How did the group start? Do you have some music studies?

The band started in 2009 after I got bored and put an advert on Gumtree looking for some other nerds to rock out with. We’ve all had some lessons of some kind over the years, Greg Chapman (drummer) was trained by a Jazz guy that told him he was too loud, I got guitar lessons for about 6 weeks when I was 11 and hated it and Ben Griffiths (bassist) is just good at everything except eating sausage rolls in the car.

You play a very powerful kind of Math, with a lot of recognizable melodies and riffs and also a lot of groove. How do you achieve that?

We spend a lot of long frustrating hours staring at each other blankly in a practice room. Other times it just clicks and we nail it really quickly. We have a pretty good ‘shit filter’ and generally know when we’re onto something. Our main drive is to make music that makes us feel something and isn’t derivative. That gets harder as you go along but it’s still great fun.

Which song for non-listeners do you recommend to get into your music? My favourite is Don’t You Know Who I Think I Am.

I mean, probably that one? That’s one of our faves too except we accidentally named it after a Fallout Boy song. I also recently listened to You Are My The Rock off Droids for the first time in ages and forgot that it’s actually pretty good, if you like pop-punk.

Absolutely horrible. Dan was a magical person and we miss him immensely. I’ve not really felt like a real person since he died but it is amazing to be able to pay tribute to him in this way.

How that tribute was born? How organization collaborated?

The main thanks has to go to James from ArcTanGent who rang me to ask us to do it. I wasn’t sure at first, I wanted to do something but didn’t necessarily feel I had the strength to do it but James was super encouraging and the festival was such a huge part of Dan’s life (and ours) that we couldn’t say no. What we’ve put together, with the help of Mike and John and some other special guests will hopefully resonate with people and live long in the memory and if it doesn’t, it will live long in ours regardless and that’s fine too.

You will be playing with Mike Vennart. He was one of Dan’s biggest influences. How did you contact him? What do you think about his music?

Mike and Dan had got pretty chummy after Mike had seen Cleft and asked them to support him on one of his tours which (don’t tell Mike) I was pretty jealous of; Oceansize were one of the founding influences of AMTP some 10 years ago. We’d go to Mike’s shows occasionally and Dan would always be chatting away with him. I’d always loiter at the back as I didn’t really want to come across as a fanboy weirdo so never really got to know Mike. It wasn’t until Dan had passed away that Mike and I started talking after a very long, drunken exchange at Strangeforms Festival in Leeds.

Mike came strolling over to me, whacked his pint down on the table and said ‘Right, you and me need to have a chat’ and that was that. We started talking about what we could do for this and what we have planned is far better than anything we could have come up with on our own.

What can we expect from the gig? We will be there!

That would be telling but we’re hoping for lots of light and shade. There will be moments of pure fun and some more reflective moments too. We’re hoping it’s going to be pretty special. 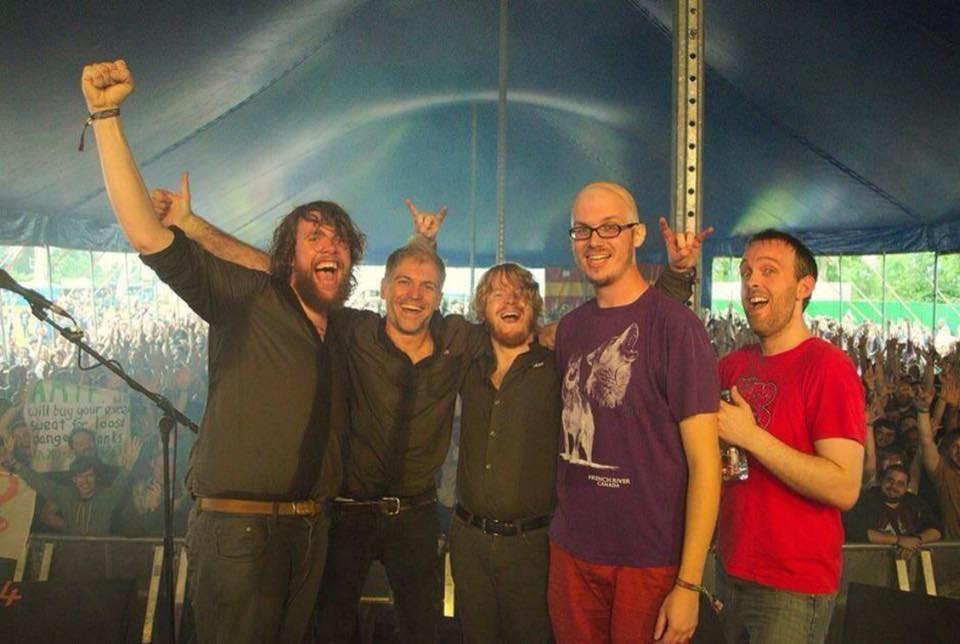 Let’s talk about Arctangent Festival. How Arctangent collaborates setting up a space where bands can grow? Which is the secret of ATG?

I think that’s what makes ATG so special really. A lot of bands that wouldn’t otherwise be expose to such massive audiences (ourselves very much included in that) get a nice taste of what it’s like to be a ‘proper’ band. We wouldn’t be the band we are now without it. When you start a proggy/mathy/whatever rock band like ours, you go into it with a certain expectation of where you’re going to get with it. The chances of being as big as Deftones or whatever are slim so when you get the opportunity to play a massive show like ATG, it gives you a huge boost and it keeps you going. The following week you’re back playing to a single drunk guy in Oldham though so you have to take the moments when they come.

Will you stay longer as audience this year? Which shows of the festival do you recommend not to lose?

Two out of three of us are. I stay every year because I’m committed to being drunk in a field, the other two often have more adult things to do like ‘work’ or ‘be a dad’ but Greg is about this year which is always nice because Greg is a fantastic drunk. Show wise, Meshuggah, Daughters, Three Trapped Tigers, Raketkanon, Voronoi, Cattle – plus loads of others that I can’t remember right now. I want to make more of an effort to watch bands I’ve never heard of this time. Ask me when I get back to see if I manage it.

Also in our interviews we are discussing with the groups about underground scenes all around the world. Here in Spain is very difficult to getting known when you have a band that isn’t classified in the most popular genres like Pop or Indie. Is it the same in UK? How is the underground scene there?

I think that the UK has one of the better scenes there is to be honest and it’s why a lot of people like touring here. The flip side of that is that bands don’t get looked after as well in the UK as they might in mainland Europe when they tour in terms of hospitality and so on and it also can be quite fickle. Early on in a bands touring career, audiences can be quite ruthless if they don’t like what you’re doing (one guy shouted ‘boringgg’ at us once years ago).

However, I think the fact the ATG and 2000 Trees festival are able to exist and be successful over here says a lot about the thirst for the weirder end of music and there are loads of other great events like Portals, Strangeforms and Bad Pond that happen throughout the year. One thing that I really like about being in a band like ours is the community is so supportive that we pretty much know everyone so when we go to book a UK tour, we know we’re going to have a decent time.

How can the bands grow in that environment?

I guess pretty easily if they’re good and the scene is supportive, they work hard and they value what they’re doing. From a different and slightly biased perspective since I do it for a living, I think a lot of bands try and cut corners on their recorded output and do it on the cheap. No matter what some article says on the internet about how no one listens to recorded music anymore (piss off) and you can just make it in your bedroom, making great sounding records is still an absolute essential for a band and the UK is full of brilliant record producers and studios.

Could you give us some advice of growing as a band? Which are the difficulties?

Ultimately, you’ve just got to work hard and be good at what you do. It always amazes me how many great bands are like ‘why doesn’t anyone listen to us?’ when they only play the odd weekend tour every 2 years. If you’ve got great tunes recorded properly, you’ve just got to get on the road and tour. Then you can complain when no one listens to you and only if you’re good. We haven’t toured for like a year but we’re completely OK with that right now.

That said, I don’t think there’s a huge amount of point in touring relentlessly when you’re not supporting a record either, you still want your shows to be an occasion and to have some purpose and, from experience, there’s only so many toilet venues you can play in before you just want to sit down and never stand up again. There’s a delicate balance to be met.

Do you remember a special moment as a band? Could you describe it?

There have been loads to be honest, we’ve been pretty hash-tag-blessed over the years but the 2015 ATG show with Cleft is well up there. Pretty much any tour we did with Cleft was amazing and boy do we miss those days but they will always be hugely special memories for us.

And to finish the interview, we would like to talk about the future, which are band’s future ideas? What are you going to do in the future? After great Health album, which direction will take the band?

Well, after ATG we’ll be getting back to writing our new record. It’s been a slow burner but it’s just about taking shape now. Life has been pretty intense for all three of us since Health came out so AMTP hasn’t been as much of a priority as we’d ideally like but nevertheless, we will have a new record to show the world hopefully pretty soon.

See you on Arctangent. We really want to see you on stage.