Crystal Lake is a Japanese band that has been revealed as one of the most acclaimed metalcore acts in recent years. Taking advantage of their appearance in the last Resurrection Fest, we spent some time with Ryo Kinoshita (vocals), Yudai Miyamoto (lead guitar) and Shinya Hori (rhythm guitar).

Hey guys, first off we want to thank you for conceding us this interview.

How are you feeling about your taking part of this edition of Resurrection Fest? Do you have any expectations for the Spanish crowd? We know that Japanese fans are very passionate, and when you were confirmed for the festival we saw a lot of Spanish fans very happy with that.

(Ryo) It’s an honour for us to be a part of this festival. It’s amazing. This festival has history. Spanish fans are emotional, energetic and passionate. Yeah, It’s really amazing.

Is this your first visit to Spain?

(Ryo) Yeah, we had a show in Madrid two days ago and today is our second and last date here. As tourists we hadn’t ever been before.

Will you have time to see any show of the rest of the bands playing at the festival? Any preference?

(Ryo) Yeah, we will have a short time after the show and then we will leave for the next destination. Stone Sour are special to me but today we won’t be able to see them.

Aside from the band’s latest album True North, you’ve also released the single Apollo last year. How was the fan’s reception of the new songs?

(Ryo) There are so many good responses and it’s a surprise to us. We’re feeling really good about it.

It’s already confirmed that you’re going to release a new single on August 8th called The Circle, plus 2 bonus tracks and a remix of True North. What can we expect from this new material?

(Ryo) Definitely an evolution. We put the feelings of Nu Metal and Heavy Metal of the 90’s like Machine Head, Pantera or Fear Factory.

(Ryo) Yeah, Soulfly. It has a bit of tribal essence. Bizarre voice of Masato from Coldrain. All of this makes the song sound really good.

(Yudai) In this single Ryo has tried a new singing style.

(Yudai) Not really clean vocals, we could say “dirty clean”!! (Everyone laughs)

The Japanese metal scene seems to be very alive with the rise of bands like you or Crossfaith as the most remarkable bands for the Spanish audience. How is it going back there?

(Ryo) Oh yeah, it’s growing bigger and bigger but gradually. There is not a huge metal scene in Japan but we’re trying to expand it to a mainstream. We try to take all the underground fans to make a whole movement in order to create a real metal scene.

And what about internationally? Is it easy for you to reach fans worldwide?

(Yudai) We try to play in a lot of festivals or foreign venues. That’s what we’re trying now. In Japan we take part of the traditional hardcore and metal scene and that’s what we try to export.

(Ryo) That’s why we think it’s good to try to expand our music to other countries, in order to have same popularity than in Japan.

Are there any set plans for an incoming new LP for a short/medium term?

(Ryo) We’re going to release a new album next fall or winter. And we’ll be back on tour around Europe in November.

Do you have any other Japanese band that you would recommend us to listen?

(Yudai) SAND, on the Hardcore scene, and NUMB, a legendary band.

Finally, we’re pretty sure we will enjoy your show today, and we also hope you will do it so. Anything else to say?

(All) Yeah, we want to thank you for the interview and we want to send “UN SALUDO PARA LOS FANS DE ROCK CULTURE!!!

Find below The Circle official video and further down their incoming European tourdates with Bury Tomorrow, 36 Crazyfists and Cane Hill. 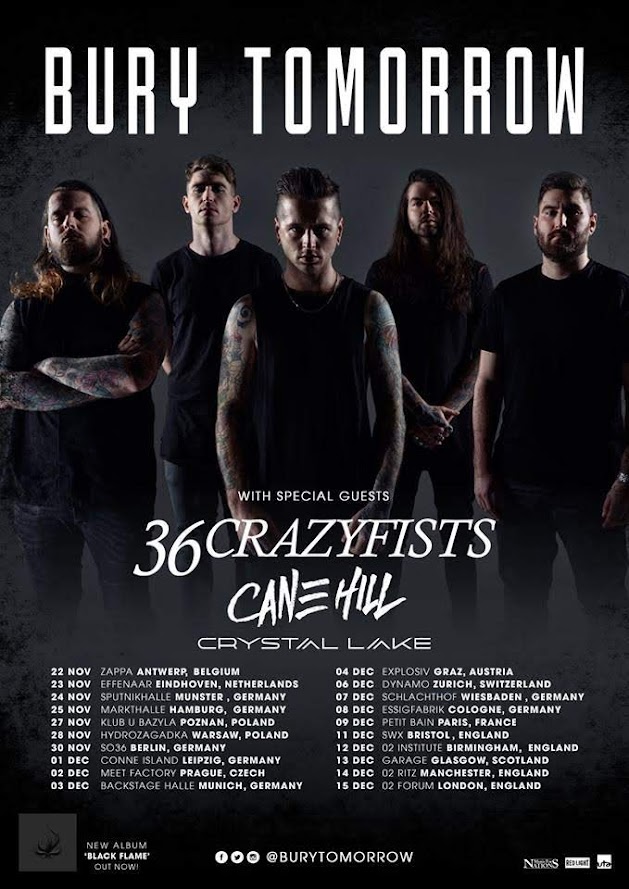